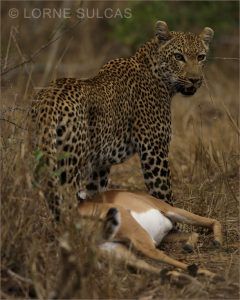 One of many powerful success lessons from Africa’s Big Cats that I share in my keynote presentations is how to survive brutal competition by innovating and doing what no-one else is doing.  As the smallest (by shoulder height) of the large predators, the leopard has to constantly compete with the much more powerful hyena and lion, both species of which tend to specialize in hunting essentially large herbivores.  The leopard on the other hand, is an extremely versatile hunter, able to hunt a very diverse variety of prey, from medium to small mammals down to small birds and even reptiles.  This adaptability allows the leopard to come up with innovative hunting strategies in response to the conditions in which it finds itself.

The benefits of being able to innovate and adapt can be extended to success in business and even sport.  The following is South African rugby legend Nick Mallet’s take on last Saturday’s brutal South Africa vs New Zealand rugby match, and doing what no-one else is doing in order to prevail over competition:
“The (final) try that the All Blacks scored, they had an opportunity to go from 20-17 to 20-20, but they kicked to the corner and came up with a line-out move that no one has seen ever. It was brilliant; they are the most innovative team in the world. We’ve never seen that and we didn’t know how to defend against it. Every game they come up with these fantastic new moves, it worked so well… They take seven points and win the game because of that courage; it’s their ability to come up with new ways to score tries that’s better than ours.”